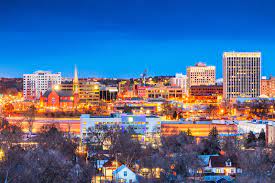 Get a QuoteTint my windows
Important Note:
When it comes to window tinting in Colorado Springs, not utilizing the most up to date films can cause major damage to your vehicle, home or business - and all without you knowing about it until it's too late.

Why Dealer Tinting in Colorado Springs

At DEALER Tinting in Colorado Springs, meeting or exceeding our customers' expectations is the foundation of what our company was built on. We are extremely proud and enjoy the long-lasting relationships that we have built with thousands of Colorado Springs residents and business owners all over the beautiful state of Colorado.

•It's the home of Pikes Peak, Garden of the Gods, and the U.S. Olympic & Paralympic Training Center.

•Cheyenne Mountain Zoo's giraffe breeding program was established in 1954 and has been incredibly successful, resulting in more than 200 baby giraffes being born during those 70+ years.

•One of the most legendary haunted places in the entire city is the Evergreen Cemetery, established a full decade before the city itself. People have been buried in Evergreen since the 1860s, and Colorado Springs wasn't officially incorporated until 1871.

•Although Cannes, Sundance, and the Toronto International Film Festival may be better-known, Colorado Springs is home to the longest-running women's film festival in North America: the Rocky Mountain Women's Film Festival. The festival has been running continuously for over 30 years and has a mission of "honoring films and filmmakers that present the world as women experience it."

Whether you care about UV and heat rejections, making your car look good, or both, Colorado Springs auto window tint is an art and the latest technology and film needs to be used by experienced technicians in Colorado Springs to get the results you want. Our industry leading film not only enhances your vehicle's looks, but most importantly, provides exceptional protection for the people in the vehicle and the vehicles interior- and all at industry low prices!

About Dealer Tinting in Colorado Springs

The Story Behind Our Colorado Springs Shop

Our passion for, along with our exceptional approach to window tinting has been the heart of our strategy for building the #1 window tinting Colorado Springs company in Colorado. Should you not be a repeat customer, soon you will see our reputation out in full force!